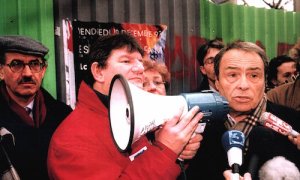 Pierre Bourdieu, taking it to the streets

I had the opportunity this past semester to take an intensive graduate seminar at Berkeley that focused on the works of French sociologist Pierre Bourdieu. The class was quite intensive, and aptly named “Bourdieu Bootcamp” by the instructor, Loïc Wacquant, from whom I learned volumes. Prior to this semester, the most I had ever read that was written by a single author was probably J.K. Rowling, so this was a fun challenge. I’m going to post a series over the next few weeks in which I will wrestle with some of Bourdieu’s concepts—especially symbolic power, fields, and doxa—in an unsystematic manner, applying them especially to struggles for social and political change. These will be nerdy posts—you have been warned.

This is the landing page for this series, which I will update with each new post.