Marx and the state (#marxtheory) 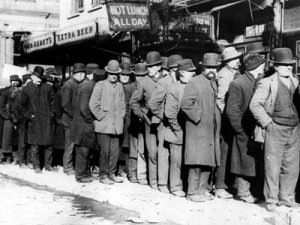 I recently argued that there is a common thread that connects (1) Marx’s analysis of material world and superstructure, (2) his prediction of the inevitability of communism, and (3) his underdevelopment of subjective political strategy. Now I want to suggest that these three themes are connected to a fourth: Marx’s treatment of the state as an incontestable apparatus.

Marx’s view of the state is complex, inconsistent, and in a process of development over the course of his writing. Above all, though, he sees the state as the bourgeois state. The state emerged to serve the interests of a particular economic class (the bourgeoisie) and it is folly to entertain hope of it serving the proletarian class or ameliorating the inequality, exploitation and suffering caused by capitalism.

To understand this assessment of the state, we must examine Marx’s treatment of bourgeois and proletariat as neatly bounded categories. He details complexities and contradictions within each class, but he mistakenly believes that as capitalism proletarianizes more and more people, their conditions will become increasingly similar and, as a result, proletarians will come to recognize their structural commonality and begin to act self-consciously as a united class. As Cihan Tuğal explained, “The general trend in capitalism, according to Marx, is this increasing simplification of polarized classes. [my notes from a recent talk]” Contra Marx, history has instead shown how capitalism often achieves the opposite: a continuum of stratification within “the proletariat” and between classes, a popular orientation toward upward mobility, and fragmentation of class identity.

If classes were to become the neatly bounded categories that Marx imagined, one might reasonably regard the question of which one controls the state as either/or: bourgeoisie or proletariat. The bourgeoisie, as Marx saw it, controls the state and acts in its own exclusive class interests. In Robert Heilbroner’s words, “the materialist view of history told [Marx] that the state was only the political ruling organ of the economic rulers. [Robert L. Heilbroner. The Worldly Philosophers. p.162]” If a neatly bounded category is in control of the state, then that control is impenetrable. It must be overthrown completely. The idea of a challenger political force (with challenger class interests) gaining a foothold cannot be entertained.

What is baffling about this rigidity is how inconsistently Marx applies it to other contenders. In The Eighteenth Brumaire Marx is all about contingency. He is interested in the details of political struggles between various factions—between and within classes—for control of the state. At length he discusses the historical consequences of particular incompetencies, missteps and maneuvers. Why not extend contingency (concerning the state) to the proletariat? Why are other actors capable of maneuvering contradictory alignments, but not the leadership of the proletariat? Why must its relationship to the state be all-or-nothing? Moreover, if it can neither muster the force to contend as a player within a multi-pole state nor even win important concessions from a bourgeois state, how then does Marx imagine it will gain the capacity to overthrow the whole apparatus (a far larger operation, at least in contexts where civil society is highly developed)?

Marx declines to take the next step — from accepting contingency to posing contingencies as potential opportunities for contestation within the bourgeois state. Indeed, he is hostile toward any workers party’s attempt to do so. Here we must revisit Marx’s foundational assumption of the inevitability of proletarian revolution. Is this not precisely what causes him to dismiss the prospect of contesting power and policy within the bourgeois state? If this foundational assumption were correct, then the logic of his opposition to making—and fighting for—demands on the bourgeois state would make some sense. As I asked in Marx’s promise of a glorious hereafter:

Why toil for table scraps if you know you’ll soon control the feast? Here Marx shares the logic of the Christian believer who resigns herself to suffering here-and-now because of her confidence in the promise of a glorious hereafter.

This all-or-nothing approach to the state is part of what Heilbroner describes as Marx’s “apocalyptic argument. [p.163]” I have to wonder if Marx’s all-or-nothing “objective” assessment of the state is related to his “quarrelsome and intolerant” subjective disposition, also described by Heilbroner (“the persistence of that narrowness, that infuriating and absolute inability to entertain dissent, which communism has inherited from its single greatest founder [p.154]”).