I’m reading Cihan Tuğal’s Passive Revolution: Absorbing the Islamic Challenge to Capitalism. I’m still working my way through it, but so far I’ve found it very insightful. There are so many things in the book that I’m looking forward to digging into, so I feel a little bad that I’m about to start with the one thing that I’m ambivalent about: Tuğal’s use of the term counter-hegemony. I’m not usually one to nitpick about terms—especially esoteric terms like counter-hegemony—but here I go…

Dr. Tuğal did not invent the term, of course. Moreover, I suspect that because I agree so much with his descriptions and assessments (of patterns of political engagement, in the case of Islamist movements in Turkey), it stands out all the more when I do take issue with something. His book has got me thinking more specifically about what I don’t like about the term generally. To be clear, I introduce his work here as a jumping off point for this blog post, rather than as the object of my critique.

Here’s my problem with the term counter-hegemony: it is unclear whether (1) it implies an opposition to the idea of hegemony itself, or (2) it notes an opposition to a particular hegemony — opposition by a challenger force (i.e. an alternative, aspiring hegemony). I want to be careful to not put words in his mouth, but I suspect that Dr. Tuğal intends something closer to the latter interpretation of counter-hegemony. I had the pleasure of meeting him this past weekend at the UC Berkeley sociology open house. At the end of one of our conversations, we briefly discussed my ambivalence about the term. This ambivalence was reinforced later that same day by a discussion with another person who subscribed to the first interpretation, i.e., that to be counter-hegemonic is—and should be—to be against all hegemony.

This is how I define hegemony only some of the time.

To me, particular actors and political alignments maintain particular hegemonies. Their political challengers are not counter-hegemonic—insofar as the term may imply being against the idea of hegemony itself—but are themselves aspiring hegemonies. They want their ideas to win.

My concern is about power and the US Left’s ambivalence toward it. Rather than framing a conversation about how a Left might build and wield power, the term counter-hegemony may suggest inherent opposition to—or at least confusion about—power itself. The “counter” part reinforces our eternal outsider status and casts doubt on whether we even want power. It’s similar to how the term counter-culture suggests the creation of sideshow alternative subcultures, rather than a seizure of the main stage — i.e., a contestation of the meanings, symbols, narratives, and institutions of the popular culture.

Let’s back up. What do I mean by hegemony? The term implies dominance, but by winning some degree of popular consent. Now, this is tricky terrain. Aren’t we against dominance? Well, what about dominant values or ideas? Are there not ideas that we wish to be predominant? What about the idea of “Do unto others as you would have them do unto you” winning out against “Greed is good”? Or how about “From each according to her ability to each according to her need”? Do we want these ideas to win the future — to actually shape reality? Or are we content with the wishing itself — the wishing for an ever-elusive someday utopia? Is it good enough to have history record our names as the righteous few who stood up for the inevitably doomed underdog?

If we see hegemony as invariably bad—something to always counter—but we are unclear about when we are referring to a particular content and when we are referring to a form (i.e., a socio-political pattern or structure), then, I believe, we are dooming the Left to eternal impotency. We cede the terrain that we need to learn to navigate if we are to ever replace their content with ours. We cast ourselves as permanent armchair critic.

Are we prepared to actually struggle? Struggle implies power. To struggle against a power is to build and wield a power of one’s own. A bottom-up power must win some degree of popular consent while delegitimizing and ultimately isolating its opposition. Here’s how victory ultimately plays out: our once-hegemonic opposition’s ambitions for domination (with a different agenda) must be constrained. If a bottom-up movement—a power—succeeds in defining its values as popular/commonsense and then succeeds in translating this broad values shift into concrete revolutionary transformations of power and wealth relationships in society, then that challenger has now become hegemonic. That’s the roadmap. That terrifying thing, with all its challenges, messiness, and moral quandaries, is what our victory looks like. But how will we ever reach our destination if we are too ambivalent about power to even look at the map?

To be clear, there are many very good reasons to be wary of power. The past century alone is full of tragic examples of once-well-intentioned revolutionary leaders becoming tyrants themselves in the messy process of executing power. But is that a legitimate excuse for allowing the power-hungry to have all the power, uncontested, while we content ourselves with sideline critique? Sideline critique can take many forms. Even taking the streets can become little more than an edgy expression of an ultimately resigned sideline. Our historic task, if we are serious, has to extend well beyond critique. Our job is to arm our critiques with power. Yes, we must wrestle with how to wield power responsibly, of course. How to do so can and should include ethical considerations and critiques of the corrupting influence power can have on individuals and groups. These are important warnings about power, but they cannot be prohibitions.

“Now, we’ve got to get this thing right…”

Power properly understood is nothing but the ability to achieve purpose. It is the strength required to bring about social, political and economic change… And one of the great problems of history is that the concepts of love and power have usually been contrasted as opposites — polar opposites — 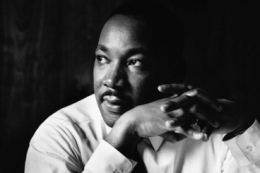 so that love is identified with a resignation of power, and power with a denial of love… Now, we’ve got to get this thing right. What is needed is a realization that power without love is reckless and abusive, and love without power is sentimental and anemic… It is precisely this collision of immoral power with powerless morality which constitutes the major crisis of our times.

—Martin Luther King Jr., Where do we go from here?